Is Monodrama effective with aggressive children ?
by Kristina Gotseva-Balgaranova and Milena Mutafchieva

In this article, Kristina Gotseva-Balgaranova and Milena Mutafchieva, child therapists, present the methodology, process and results of their study which seeks to determine whether monodrama is effective on aggressive children. The research is based on the hypothesis that aggressive children will change their problem-solving strategies in a constructive and less aggressive way, and that this will develop their interpersonal functioning. This study is intended to fill a gap in the research landscape as the little research that has been done on psychodrama focuses on psychodrama with adults. Reconfigured, the notions of human creativity and spontaneity of Moreno’s theory are used in the psychodrama for children that has been established by Alfons Aichinger in Germany.

Children’s aggression is maybe one of the most frequent reasons for requesting psychological assistance. For sure it is a serious topic and it is a challenge dealing with for parents, teachers and practitioners. If not treated in the earliest ages when appears, it hides the risk of developing antisocial and delinquent behaviour (Farrington, 1990). Aggression can be defined as a pattern of interpersonal actions including verbal or physical behaviours that are destructive or offensive to others or to objects (Bandura, 1973). While nearly every child is aggressive in some way, aggression here involves a number of problems affecting more than one life domain – family, school, peer relationships, etc. (Bandura, 1973). As noted by Aichinger and Holl (2017), usually, when a therapist meets an aggressive child they have already a long career as “outsider” or “behaviourally disturbed” child. In general, they have already seen many child specialists, are isolated from their peers, are categorised as “problematic” by teachers at school, and often perform poorly during their early elementary and school years.

Typically, they have already seen many child specialists, are isolated from their peers, are categorised as “problematic” by teachers at school, and often perform poorly during their early elementary and school years. Aggressive behaviour is often a comorbidity of other behavioural disorders such as attention deficit, hyperactivity, and post-traumatic stress disorder (PTSD). A longitudinal study showed that aggressive behaviour stabilises over time during childhood and adolescence, and aggression is more consistent over time than other behavioural disorders (Hill et al., 2004). When children’s aggression affects multiple domains (school, family, etc.), there is high probability that these disorders will persist (Loeber & Dishion, 1983) and may lead to negative consequences in adolescence, such as drug and alcohol abuse, school dropout, early parenting, and violence.

Therefore, early interventions are very important and psychodrama can be a useful method for such treatment.

During childhood, aggression can take many forms and behaviours. We will therefore begin with a brief theoretical description of these forms. Moreover, the main trends in psychodrama with children are presented.

There are two types of behaviour considered as aggressive by psychologists, both include a motivation that can be manifested through different behaviors.

Upon observation, Norton (1988) identified the following categories commonly used in the literature:

There is a long-standing debate in developmental psychology circles about what can lead to aggressive behaviour, especially when considering severe aggression, and there is always the question of inheritance. Mason and Frick (1994) summarised the results of 12 studies with twins and 3 studies with adopted children. They concluded that there was a moderate degree of inheritance of antisocial behaviour, but exclusively in cases of severe violence and crime. In a longitudinal study in New Zealand, Caspi et al. (1995) aimed to assess the temperamental traits of 800 children with problematic behaviour. The children were 3, 5, 7 and 9 years old at the time of the first measurement and 9, 11, 13 and 15 years old at the time of the second. The results showed that early self-control and attention deficit, emotional instability and negativism were highly correlated with later externalised behavioural problems such as aggression.

In addition, there is evidence that family interactions are consistent covariates for early forms of deviant behaviour. Patterson et al. (1989) have attempted to identify the critical aspects of parental behaviour that may lead to aggressive behaviour by their children. They claim that the major factors in aggression are: a) poor parental control and discipline; b) lack of parental control over the child’s activities; and c) lack of parental care and warmth. In many cases, children who behave aggressively have witnessed aggressive ways of solving problems, instead of more appropriate and effective solutions. Patterson et al. (1990) state that parental social skills are very important for early prevention of antisocial behaviour.

The approach to individual therapy that was used in the present study is based on the method of psychodrama for children established by Alfons Aichinger in Germany and is related to Moreno’s methods for adults, though in a different form. Moreno’s key concepts are included in the work with children, namely the emphasis on human creativity and spontaneity and their development if they are restricted or limited. Aichinger and Holl (2017) assert that the characteristics of children’s creativity can be unfolded through symbolic play. Although the approach is centered on group therapy with children, is also offers many insights into how to work in individual therapy.

In an individual session with a child (monodrama), the issues are usually addressed issues using animals, human figures, or glove puppets, and the psychotherapist is required to assume multiple roles. Aichinger calls this “Part work with animal figures”. Unlike the symboldrama group method developed by Aichinger and Holl (2017), only one therapist is present in individual sessions. In the first session, during the setting of the first scene, the intrapsychological system is presented and the therapist asks the child to choose an animal to represent the “problematic aspect”, i.e. the aggressive part of themself. The child then selects an animal to represent the aspect that is affected by the problem (e.g., that they have no friends because they are aggressive), and finally an animal to represent the child themself. Later on, the family-system and the school-system are also represented by animal figures. The child is asked about their relationship with each figure in the game as well as their feelings towards each figure. At the end of the first session, the child is asked what could be changed to allow the animals to become friends and to encourage cooperation between them. In our practice, we have observed some remarkable scenes even during the first few sessions. One of the boys (age 6) symbolically “killed” his father seven times during the first session because he had beaten his mother almost to death. This is a safe and constructive way to expose the abuse without offending anyone and to try to identify alternative behaviour strategies in violent situations.

In each subsequent session, the child is asked what they would like to play on that day and the therapist, using an animal figure, also participates in the scene. Sometimes the therapist can also help the child to choose a game and roles according to their own interpretations of the case, but this should be done in a non-invasive way and leave enough space for the child’s creativity.

According to Aichinger and Holl (2017), the primary objectives of psychodrama with children are:

However, there are often difficulties with children who behave aggressively. They suffer from a lack of social skills and are frequently rejected and labelled as “difficult”. They commonly destroy other people’s toys and behave inappropriately in a social context (Aichinger & Holl, 2017).

Main purpose of the study

The present study aims to measure the effect of individual psychotherapy and more specifically of individual symboldrama on aggressive behavior of children.

The hypothesis is that aggressive children will change their problem-solving strategies in a constructive and less aggressive way and thereby develop their interpersonal functioning.

The study had a within-subject design with two measurements for each child:

Between the two tests, each child completed 10 individual symboldrama sessions. The dependent variable was the children’s score on the pro-social and emotional development scale.

For the pre-test and post-test, all children were evaluated with the pro-social and emotional development Scale for 4-6 year olds, created by Nadia Kolcheva (PhD at New Bulgarian University). It contains two sub-scales – pro-social behaviour and self-awareness.

The items for pro-social behaviour measure children’s strategies for reacting in a conflict situation – they are either aggressive, passive or adopt constructive/compromising responses. An example of this item is shown in Figure 2. The sub-scale consists of 6 illustrated stories and for example, in Figure 2, the story is “The boy/girl has a teddy bear. The other child also wants to play with it. They start pulling it. “, the test question is “What would you do in this situation? “. Possible responses for the child are: 1. No answer / I don’t know; 2. I will hit him or yell at him; 3. I will cry; 4. I will find another child to play with; 5. I will ask him to play together.

Fig. 2. Example of a pro-social sub-scale item.
With a short story, the child is asked:
“What would you do in this situation? ” 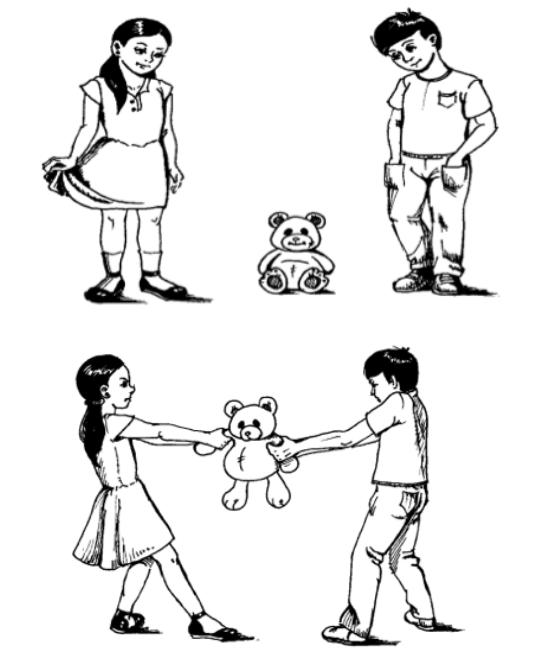 The Self-awareness sub-scale items measure the child’s self-perception and self-knowledge. The child is instructed to answer 7 different questions. Some examples of the items on the sub-scale are:

Between the two measurements 10 individual sessions of monodrama with children were performed with each child. (Aichinger, 2012).

The participants were six children between 4 and 6 years of age, from different groups in a kindergarten in Sofia, Bulgaria. The work with all children started after the consent signed by the informed parents and an encounter with both parents.

The test with the prosocial and emotional development scale takes about 20 minutes per child, who is retested individually. The whole process took about 2.5 months and at the end the children were retested with the same scale.

Unfortunately, it was not possible to perform a quantitative analysis, due to the fact that the study sample was too small. Hence, the results are based on a comparison between the total scores of each child on the pre-test and post-test. The results show that children’s performance on the prosocial and emotional development scale increased after 10 sessions of individual psychodrama. The results are presented in Figure 1. A higher score shows a tendency towards less aggressive response strategies in a conflict situation, i.e., the higher the scores, the better the strategies and self-awareness.

Chart 1. Results showing the differences between the pretest and post-test for each child on the prosocial and emotional development scale. 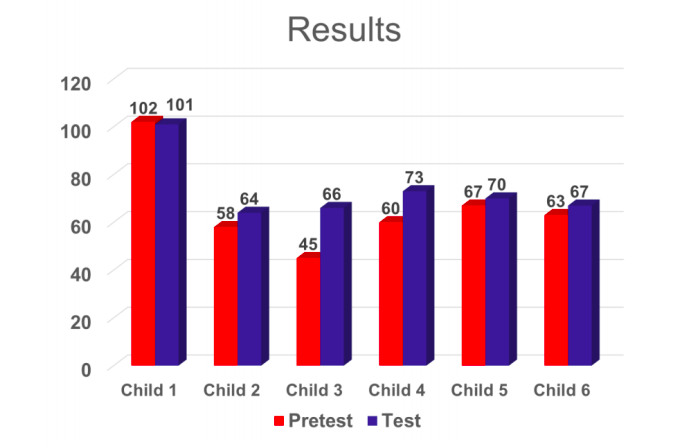 On the graph, we notice that only one child (six-year-old, child 1 on the graph) scored the same at the two tests. Moreover, most of the children’s behavioural problems decreased during the 10 therapy sessions. It is interesting to note that there was a difference in the scenario, roles and figures used by all children except Child 1. Child 1 actually played with the same toys and almost the same roles each time, which is interesting in terms of his role repertoire. He was the child with the most severe symptoms at the beginning of the therapeutic work and while the therapist and parents reported significant progress, this could not be verified by the test. The results of the post-test clearly show that 5 of the 6 children, who had different aggressive symptoms, were positively influenced by the symboldrama.

In conclusion, the hypothesis of the study could be confirmed, whereby after 10 individual sessions of symboldrama, the aggressive children displayed constructive strategies in conflict situations, which was not the case at the beginning of the therapeutic process.

ABOUT US
Current and well-founded information on psychodrama theory, practice and research
Contact us: contact@psychodrama.world
FOLLOW US
© The Federation of European Psychodrama Training Organisations (FEPTO) 2023