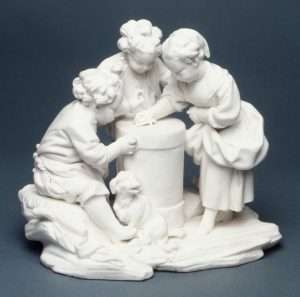 Stefan Flegelskamp describes psychodrama for a group of children from the age 8 upwards.  The children should be close in age and have a similar level of development. The aim of the therapy is to socialize the children through children’s play. The focus is directed at the non-linguistic processes which show corresponding actions; learning by their assigned semantic content to understand and to respond adequately in a play.

The group of peers are here allowed to try out and practice new roles which are not defined by age and gender, as they normally are within the family unit; and to test their commitment to existing standards. The group socializes the child through communication and co-operation and thereby facilitates overcoming egocentricity and strengthens egalitarian components using recognition and rejection. The group gives the child the opportunity to determine how he wants his relationship to these «others» to be. Claims can be expressed; intentions agreed upon and announced and, in a unifying process, norms, rules and limitation defined and perhaps even changed.
These new action experiences lead to a profound change in the child’s concept of himself.
Observance of the play of childrens’ forms of communication leads to an adjustment in the psychodrama techniques employed. The focus will be directed at the non-linguistic processes which show corresponding actions; learning by their assigned semantic content to understand and to respond adequately in a play.

The preparation phase includes the clarification of the indications for each child, the points for consideration and reaching conclusions regarding the composition of the group, and then finalizing a contract for the work.
It will be brought to light whether the child has in fact a desire to be together with other children and improve relations with them and if an age-appropriate ability to relate to other children exists. In this phase the level of «I» development is more important that the type of symptoms shown.
In addition it will be attempted to capture the inter- and intrapsychic conflict situation and the connection of these to visible symptoms in the child. Getting a clear understanding of and insight into the dynamics of the family system and the meaning of the child as «identified patient» is especially important.

For children who in the first years of life have experienced too little security or have suffered traumatic injuries and therefor were unable to develop basic trust, and are lacking in personal initiative or autonomy, it is appropriate to determine whether a group therapy could be helpful.
The children should have come along far enough in the development of an «I» to at least temporarily be capable of identifying with other children so that the participation in a common game to a limited extent is possible.

For children from the age of 8, a group of 6 children is a good size. The children should be close in age and have a similar level of development. A mixture of uninhibited and energetic children is recommended as this allows them to benefit from each other most effectively.

Within contract talks with parent and child the following points will be discussed.
–      the reason for the therapy and the desired change
–      presentation of the method
–      explanation of the need for a trial period of five hours. After this time all participants will have the opportunity once again to reconsider continuing in the group.
–      Expected duration of the group of about one year.

A group room of minimum 30 square meters. Foam padding which can be used as seating and as building blocks. An assortment of larger and smaller cushions, a box or cupboard, clothing, scarves and hats. Baskets made of soft, fingerthick nylon, play materials, glue, and a few stuffed animals.
The children should also bring some of their own toys and play materials.
The group takes place weekly and lasts 60 minutes.
The group is lead by a constantly present 2-therapist team.

Structure of a Children’s Session

Each session begins sitting in a circle and finding out what the children want to play together.
The children are encouraged to suggest stories for enactment. Even if the ideas that the children come up with seem to be only superficial topics from television programs, these will have a deeper meaning for the children. Behind the facade of banal «canned culture» they develop their own individual stories, inner images, and group themes. The respective dominant developmental tasks of children combined with their separate personality structures and individual coping and defence mechanisms create the frame and filters for the suggested topics.
The leaders then help the children to find a common theme and one meaningful scene to develop and act out from out of the diverse and disconnected suggested issues. This is discussed and negotiated. A majority vote can never, in this situation, replace the striving to reach consensus.
After the theme to be acted out has been found, the children choose roles to play in the scene. The leaders will work out key qualities of the roles with a few precise questions. For certain roles which are associated with the exercising of power, the consent of the others must be given or other agreements reached. It is important to make the children aware of the limitations of the roles they will be portraying.
When all the children have chosen their roles, they then together decide which roles the two group leaders will play. In this, keen attention must be paid to the development of the group and the individuals within it. In the case of chaotic and destructive behavior, the leaders themselves will choose the players to fill auxiliary-ego roles.
The whole room is then divided up and arranged to suit the chosen theme. Attending to the details of designing the «stage» area opens up still more opportunities for action for the children.
Before the play starts each child explains and demonstrates his props and equipment which must be taken into account by the others during the action of the play.

After the planning and space-designing phase, the play can begin. During the acting out of the piece, the children are also free to improvise. The proposed action and the final acting out of the story do not need to match. The dynamics of the interaction will often lead to a quite different sequence of events.
However, to ensure a common course of action, all participants need to be helped to understand the changes which happen. The play is a jumping-off place; a vehicle for creative development and expansion.
Within this special space of potential, the children can stage «bad scenes» which they were made to suffer and to re-visit scenes which they long to experience again. They are able here to show their experienced emotionally stressful situations and to reveal repressed feelings. They become able to free themselves in an act of catharsis from the threatening character of these bad experiences and feelings. There comes a reduction of intra-psychological stress and the formation of a healthy self-acceptance.
Since this game together is also fun for them, the kids find within it a continuous flow of their inherent vital life-and creativity processes.
The psychodrama methods of adult group psychotherapy are here used in a modified form. The techniques of role-reversal, mirroring, soliloquy, doubling and interpretive interventions occur mainly at the symbol level as the therapists themselves take roles and are able to influence the course of the play.

The aim of the closing phase is to allow the action of the play to come to conclusion and to facilitate a short review of what has happened. The completion of a session raises particular difficulties because severe emotional processes have been brought for a short time into motion and will either fade or need to be calmed and reassured.
The children are dismissed from their roles clearly about 10 minutes before the session ends. To neutralize the symbolic effect of the play situation and return the group to reality, the therapists remove props, costumes and hats and return the «scenery to it’s original state. During a short discussion round in which mainly the leaders express themselves praise concerning courageous role choices and other positive feedback will be given to the children.